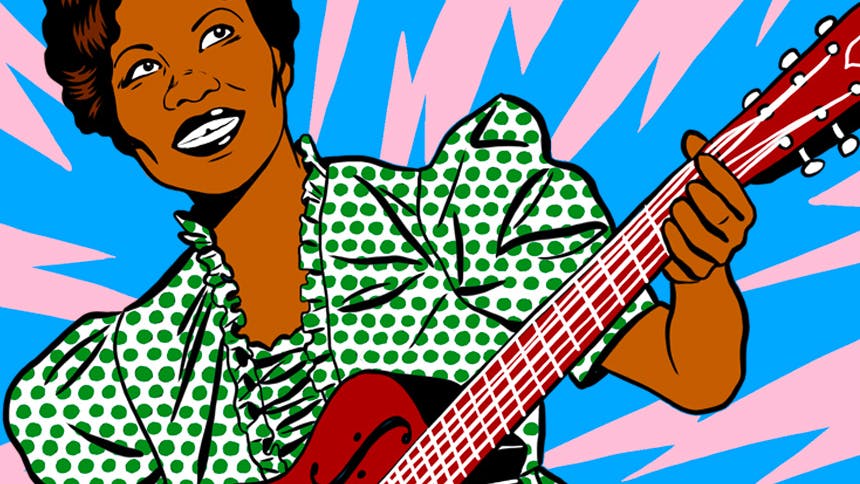 The Rock & Roll Hall of Fame selection committee created the“Early Influences”category to honor people “whose music predated rock n’ roll but had an impact on the genre inspiring its leading artists.” As of 2015, there were 32 people inducted into the Early Influences category and in 2018, 77 years after her first album, Sister Rosetta Tharpe became the 33rd. 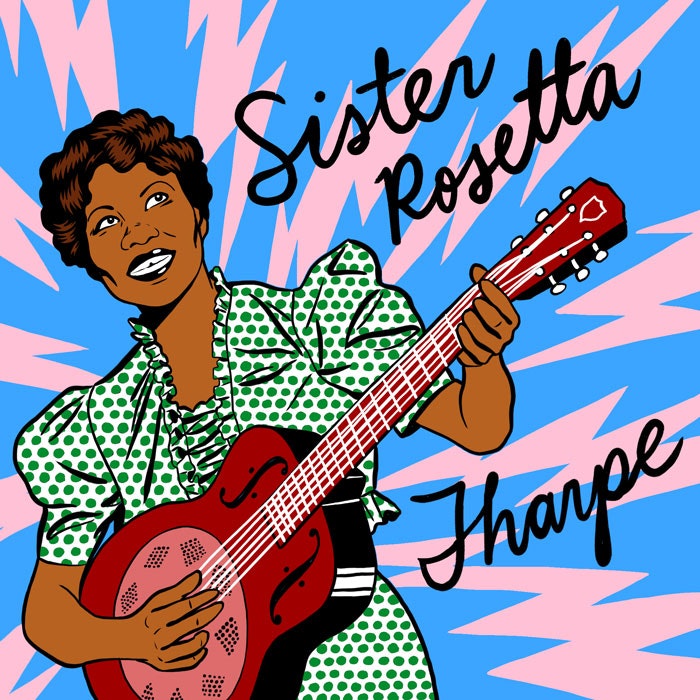 The gap in time between this honor and her death speaks to a long history of the erasure of black women who not only influenced, but shaped the invention of rock n’ roll in the United States and in the United Kingdom.

Rosetta’s relationship with music began in the cultural institution where hundreds of thousands of people from the south received their formal music training—the black church. She was born in Arkansas in 1915 and raised in Mississippi, which places her approach to gospel at the intersection of the Mississippi Delta Blues and the Holiness Church of God in Christ—two seemingly opposing forces. The brand of religious music that Tharpe recorded and performed was inherited from her mother’s life as an evangelist and she grew up intrigued by the blurred lines between gospel and secular black popular music.

A product of a musically gifted family, her father Willis Atkins was a talented singer who picked cotton as a sharecropper to survive. Her mother Katie Bell Nubin, was a musician and an active member of the Church of God in Christ (COGIC). Unlike traditional Baptist churches, the holiness or sanctified churches that Rosetta and her family attended worshipped using instruments associated with the raunchy juke joints of the early 1920s. Fast paced crashing cymbals on the drums, rhythm guitar, deep reaching bass lines and high energy dancing were part of the performance of the church’s style of faith.

COGIC was also progressive in its ideas about gender and welcomed women ministers. Katie Bell spent decades on the southern church circuit as an evangelist making a name for herself as an electrifying preacher. Her precocious four-year old daughter Rosetta equaled in the attraction.  By age six, Rosetta was the primary pianist for her mother’s traveling revival troupe.

Arguably, Katie was Rosetta’s first agent and it was Katie who introduced Rosetta to the guitar. While on tour for the church, Rosetta became a performer and learned how to excite the crowd with piano riffs and emotive vocals that sent people into a state of transcendence, much like the responses of screaming fans who showed up to see Elvis, a man who studied both music of the black church and who, admittedly, paid close attention to Rosetta’s innovative distorted guitar effect and her unique guitar picking.

Katie eventually left Rosetta’s father Willis in Mississippi, and alongside hundreds of thousands of people fleeing from the south to escape racialized violence, Rosetta and Katie migrated north to the city of Chicago where Rosetta would learn a new type of rhythm and blues. Upon settling in the Mid-West, Katie married her daughter off at the age of nine-teen to a questionable man named Thomas Thorpe, a fellow minister in the COGIC.

In New York, she played local gigs and major clubs like the Savoy, a segregated venue that brought in black entertainment solely for the enjoyment of white patrons. On the NYC club scene, she played with some of the biggest names in the industry, Duke Ellington and Cab Calloway were among them.

With New York came Rosetta’s first recording deal. She was pursued by the top labels of the day, but she settled with the infamous Decca Records in 1938. Now she would appear in larger clubs and performed on national television backed by Lucky Millinder’s jazz orchestra. It was at this stage in her career that Rosetta begin to encounter the black church’s side-eye. Suspicion and murmurs about her separation from the gospel emerged on the national church front.

Most controversial was her first hitRock Me. Rosetta’s lyrical remixing of the traditional religious song shook her fan base. The original lyrics were “Jesus won’t you hear me playing.” Rosetta sang “Won’t you hear me praying.” Removing the word Jesus and created enough ambiguity for sexual innuendo which led to her broader appeal and to more Decca Record sales.

When confronted about these perceived transgressions by friends and family from the church, Rosetta claimed that she overlooked a stipulation in her contract that required that she sing any song the record company decided. The follow up song toRock Mewas titled “Tall Skinny Papa” an up-tempo blues number that explicitly expressed desire for a male figure who was notTHEgood savior. The song also did the work to hush concern about her sexuality. However, later it was confirmed that Rosetta was queer and involved with Marie Knight, a woman she not only formed a duet with as a professional performer, but also engaged as a romantic partner.

Eventually, she returned to gospel and centered her Christian beliefs. The combined pressure of her religious roots and the social hysteria surrounding lovers of the same sex threatened her relevance and success. In 1949, after ending a relationship with Marie, she agreed to participate in a spectacle of a wedding endorsed and encouraged by the record label for profit. The husband, whom she married in front of a paying crowd of 25,000 paying guests, was Russell Morrison. He became her manager and the two remained married for more than twenty years. Close friends saw the marriage as a publicity stunt and felt confident that Rosetta’s romantic relationships with women continued.

Rosetta Tharpe is part of the lineage of legendary artists that include Aretha Franklin, Marvin Gaye, Nina Simone, Sam Cooke and Al Green, who were the children of ministers who  broke from the church and sang their way into the soulful pop charts. For decades, artists like them paid the cost for straddling the fence between good ol’ church music and the devil’s music on the other side of it. But the exposure she received with this public struggle helped her to secure the kind of wealth typically reserved for her white male contemporaries—though she did not win the acclaim.

Today she has a body of work that scholars and artists can explore to understand the intricacies of her guitar style, her lyrical phrasing and her phenomenal skills as a live performer. She is a pioneer whose name can’t be ignored when discussing the earliest influences and architects of rock & roll. So while Chuck Berry, Buddy Holly, The Who and The Rolling Stones became the face of rock & roll, real fans know that all of them existed in the shadow and under the direction of Rosetta. 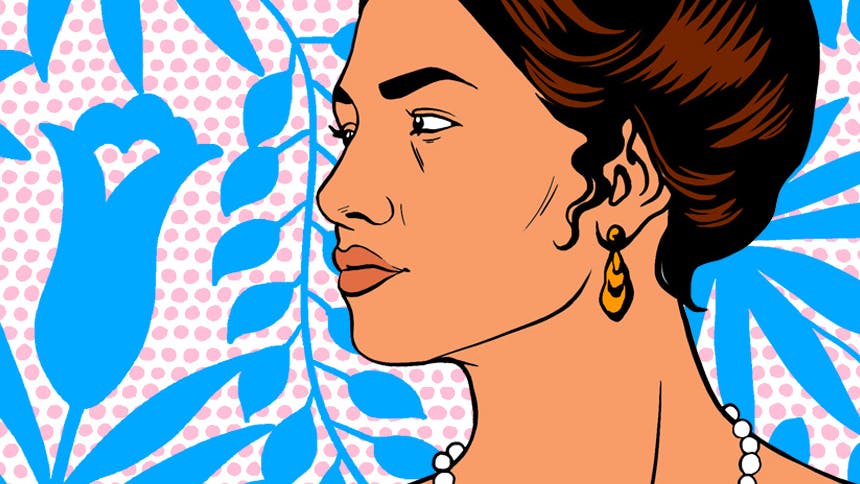 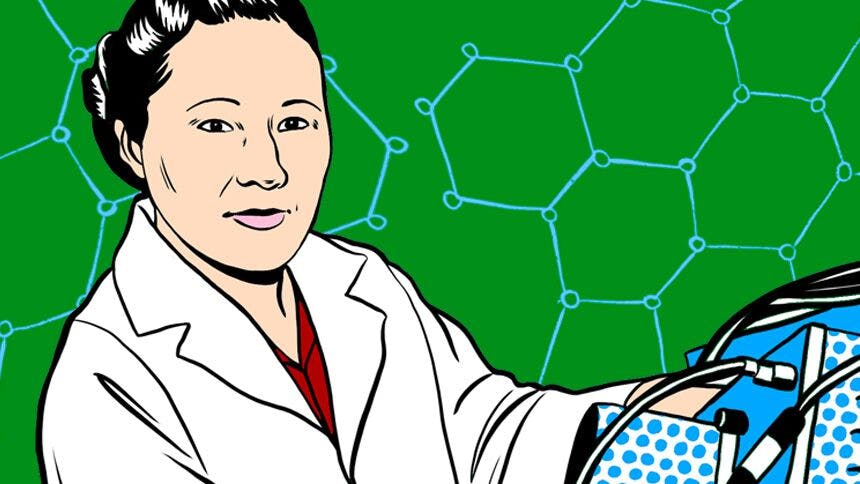 Identity
The Once-Forgotten Chinese American Physicist Who Shattered A Law Of Nature
Scientist. Innovator. Advocate. Meet Chien-Shiung Wu, a brilliant and trailblazing physicist who changed how we perceive the universe.
7 min read
Read More
Sign up for our newsletter
We'll send you updates on our latest launches and more.