It started with a far-flung idea—that a pill could help women plan and prevent pregnancy. This concept, which we mostly take for granted today, was a radical notion for American women in the early 1900s. But, like most people who end up changing the course of history, the team of advocates and scientists who dreamed up, funded, and developed birth control pills possessed grit and resilience in spades.

When “the pill” finally became a reality, it meant women could possess control of their reproductive choices. Today, it’s the most popular form of birth control in the United States. But at the same time, we’re facing a different type of challenge to a woman’s control over the choices she makes about her reproductive healthcare. So, it’s as good a time as any to revisit the complicated road Margaret Sanger and the women and men behind her, tread on the way here. And of course, say a wholehearted thanks to all those who made our present-day access to birth control possible. 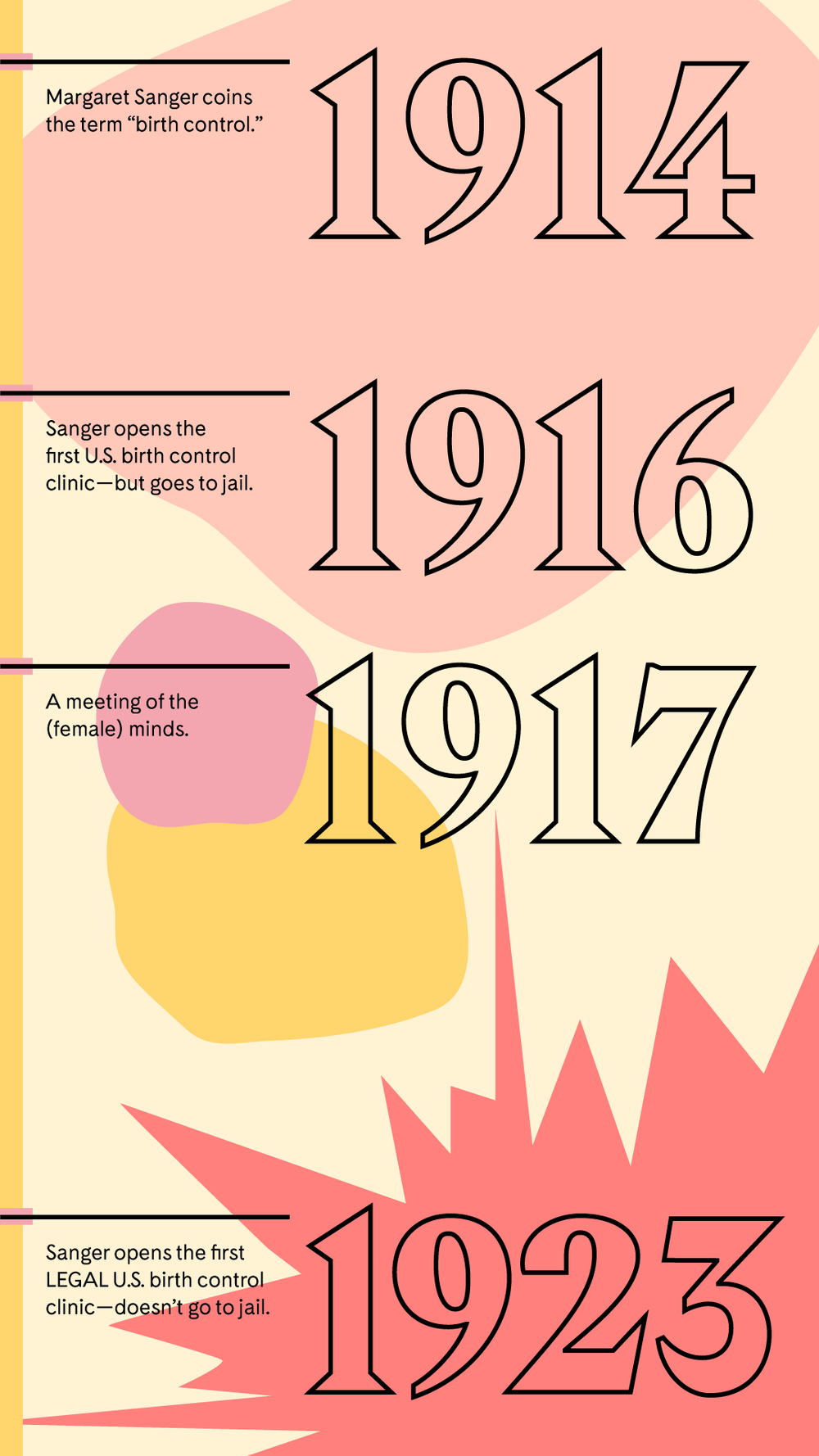 1914:Margaret Sanger coins the term “birth control.”
Margaret Sanger, born in Corning, NY and trained as a nurse, becomes an advocate of women’s reproductive rights. In 1914 she coins the term “birth control” and also starts a feminist publication called Woman Rebel,which promotes women’s rights for contraceptive devices—a radical idea at the time. However, since this type of advocacy is illegal due to the Comstock Law—a federal act that prohibits the distribution of and education about contraception—Sanger flees to England to avoid a jail sentence.

1916:Sanger opens the first U.S. birth control clinic—but goes to jail.
After her charges are dropped, Sanger returns to NYC in October 1915 and, a year later, opens the United States’ first birth control clinic in Brooklyn, NY. However, it is quickly shut down, and she is sent to jail for violating, again, the Comstock Law. She serves 30 days and is released.

1917: A meeting of the (female) minds.
In 1917, Sanger meets Katharine Dexter McCormick, the second woman ever to graduate from the Massachusetts Institute of Technology and an heiress to a great fortune. Like Sanger, McCormick is a supporter of reproductive rights. Soon after their meeting, McCormick starts smuggling illegal contraceptives into the U.S. during her trips to Europe. But things are only getting started with these two. 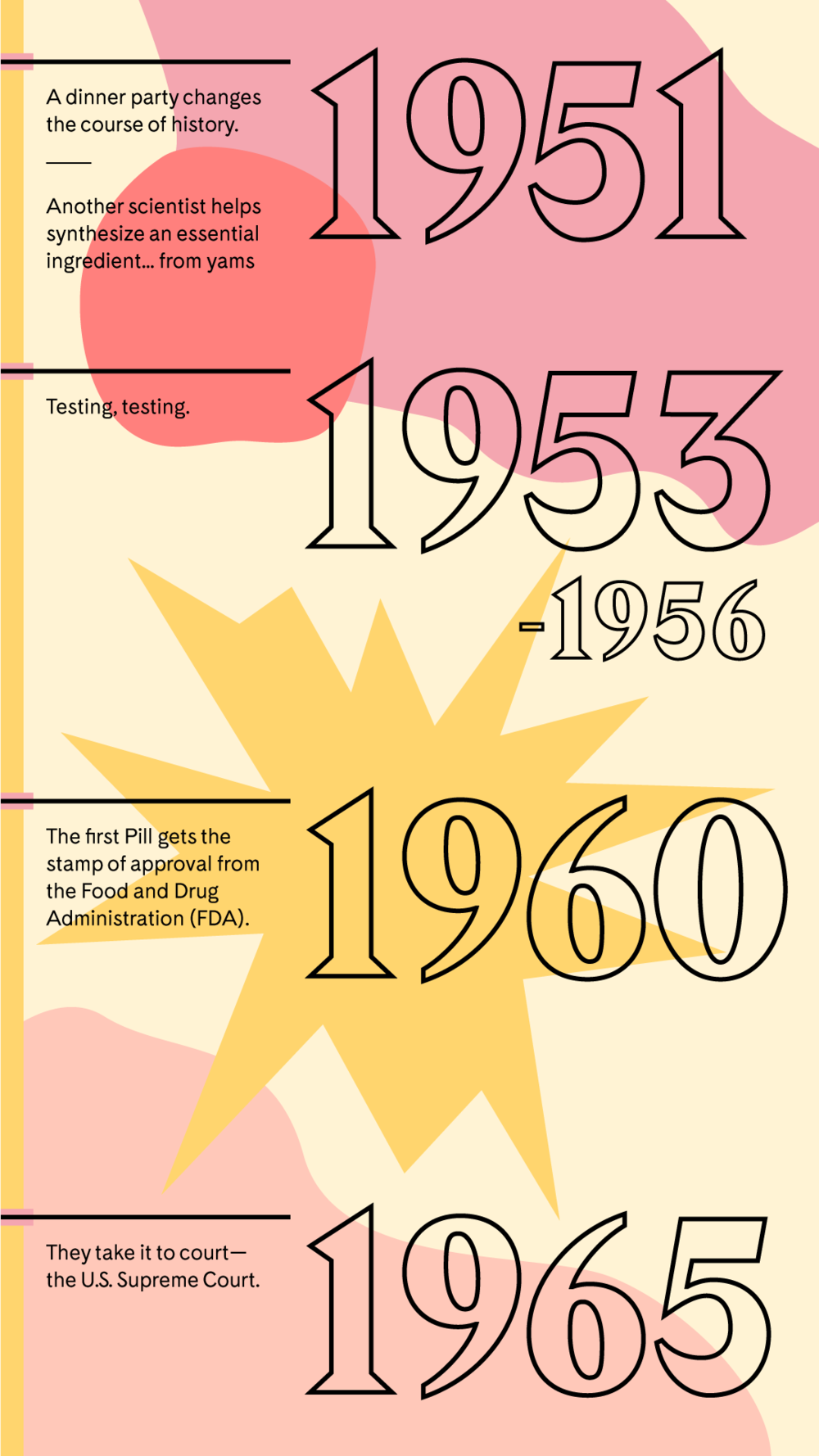 1951:A dinner party changes the course of birth control history.
At a dinner party, Sanger meets a former Harvard assistant professor of physiology, Gregory Pincus, whose primary research is on reproductive science. This naturally piques Sanger’s interest and she persuades him to work on the development of a birth control pill and convinces McCormick—she’s the one with that big fortune, remember?—to fund his research.

1951: Another scientist synthesizes an essential ingredient…from yams.
Meanwhile, in Mexico City, chemist Carl Djerassi helps synthesize a progestin, which is a type of female horomone that can 1) help prevent sperm from fertilizing an egg and 2) change the lining of the uterus to stop the implantation of a fertilized egg.  It will become a key ingredient in the invention of the birth control pill. Fun fact: This progestin was developed from Mexican yams (who knew?).

1953- 1956: Testing, testing.
In 1953, McCormick writes Gregory Pincus a check for $40,000 to conduct the final stages of research and to conduct human trials.  Now that the semblance of the pill is in place, Pincus and his friend, gynecologist Dr. John Rock, test the pill on 50 women in Massachusetts, while larger scale clinical trials are done in Puerto Rico. Both trials are deemed a success. Folks, we have lift off.

1960:The Pill gets the stamp of approval.
On May 9, 1960, the first oral contraceptive is given the stamp of approval by the Food and Drug Administration (FDA). Though it is widely referred to as “the Pill,” it is really just a nickname for women to discreetly request the medication from their doctors. Woman now have the ability to influence their own reproductive choices.

1965: They take it to court—the U.S. Supreme Court.
Even decades later, the Comstock Law is still enforced in some states, including Connecticut. But in 1965, the U.S. Supreme Court rules this law unconstitutional in the landmark case of Griswold v. Connecticut, when Estelle Griswold (a Planned Parenthood executive director) and Dr. C. Lee Buxton (a Yale professor and doctor) are arrested for providing contraception to married couples. The two appeal their case and the U.S. Supreme Court votes in their favor, striking down state laws that make the use of birth control by married couples illegal. 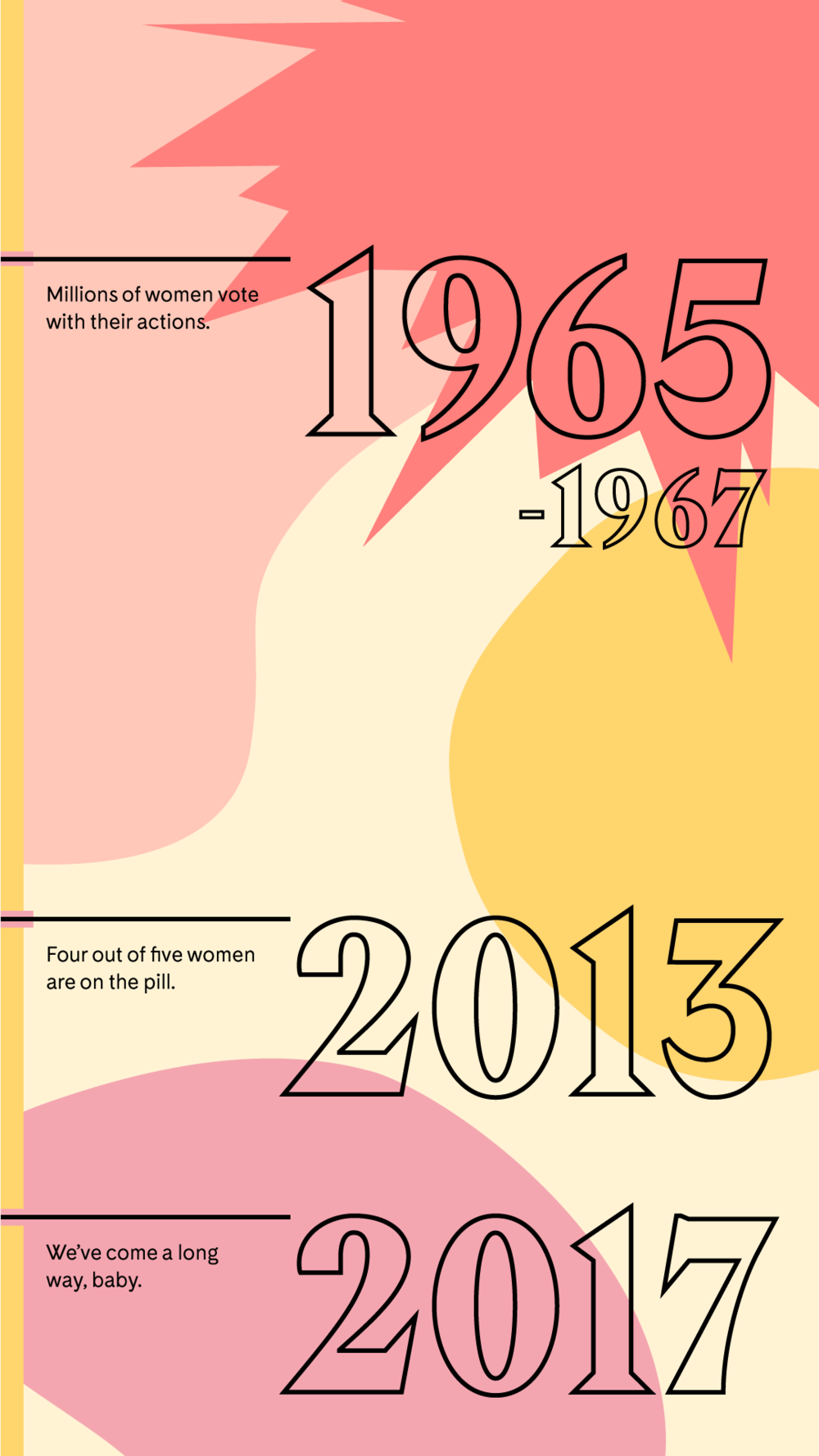 1965-1967: Millions of women vote with their actions.
In 1965, just five years after it goes to market, 6.5 million women are using the Pill for pregnancy prevention; in another two years, the number of women using oral contraceptives doubles to a whopping 13 million.

2013: Four out of five women are on the pill.
The Centers for Disease Control and Prevention report that more than 99% of women of reproductive age who have ever had sexual intercourse have used at least one contraceptive method—the Pill being the most commonly used form (82%) next to the male condom (93%).

2017: We’ve come a long way, baby.
Today, the Pill is the most popular form of contraception in the U.S., used by 10 million women each year. That being said, finding the right birth control is always an individual journey and personal choice, and the Pill may not be right for everyone. There are 35 different types of birth control pills out there, each with varying amounts of hormones. So research your options, talk to your doctor and find out more facts at www.knowyourbirthcontrol.com.