Historically speaking, I’ve never been much of a pot smoker. I blame it primarily on the fact that my first experience was in high school, when I went to visit my brother at college, and I got so stoned I was literally speechless for six hours.

My primary activity of the night consisted of involuntarily sliding off the couch like person-shaped lava. I also ate an unfathomable number of chocolate pudding cups.

Of course, that was *clears throat* nearly two decades ago, and the pot industry has changed mightily since. Among the few bright spots of the 2016 election was the legalization of recreational marijuana in California, adding it to the ranks of Alaska, Colorado, Maine, Massachusetts, Nevada, Oregon and Washington. It still remains a Schedule 1 substance on the federal level though (i.e. they take that shit seriously, and Attorney General Jeff Sessions is super not chill about it).

But considering the booming industry in California alone, with some projections placing it at $5 billion in revenue in its first year, it’s difficult to imagine that this inventive and adaptive industry will be moving backward anytime soon. If anything, more women and POC founders need to get on board.

Among the new class of innovators: Scott Campbell and Clement Kwan, co-founders of a company called Beboe, which sells high-end vape pens and pastilles. The New York Times recently referred to them as the “Hermès of marijuana,” and for good reason: The packaging and the products themselves are stunningly beautiful. It is indeed a fancy-ass product.

Campbell, a celebrated tattoo artist and fine artist, is behind the aesthetic that makes the historically un-glamorous (and, depending on who you ask, douchey,) experience of “vaping” feel completely fine. And by “fine,” I mean “totally awesome.”

First of all, there’s the tactile experience: The pen itself is contained in a glass test tube, stoppered with a branded cork, around which there is a paper tag with the word “DRUGS” letterpressed in gold foil. 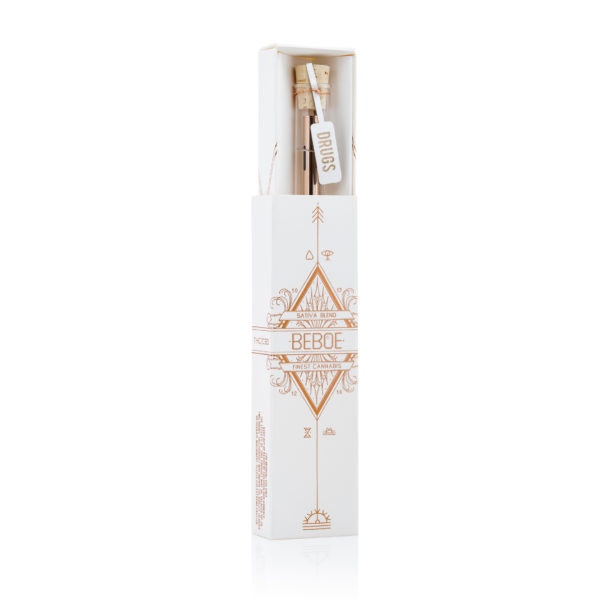 The pen itself is a lovely rose gold, etched with designs along the side. It’s simultaneously discreet and something you wouldn’t mind having poke out of your shirt pocket, because it’s just plain pretty.

And then there are the aforementioned DRUGS. Each disposable pen contains 0.5 grams of Sativa blend THC and CBD, which is intended to strike the “perfect balance for social consumption,” according to the packaging.

Now, I don’t know about being perfectly balanced in a social setting in this instance (or in life generally), because my personal preference is to indulge only before bed. What Ican say is that it has the ability to convince my brain that I am extremely empathetic and can understand all angles of anh argument.

For instance, after watching Wonder Woman recently, post-Beboe session, I found myself thinking, “Ares isa dick, but he’s not wrong about humans being complete garbage. I think he brought up some really good points, and maybe she should have heard him out a little more before blowing him up.” You know. Stuff like that.

But perhaps my favorite thing about the pen is that unlike the four-foot glass bong my brother set in front of me all those years ago, you have an ability to control how much you’re consuming, which is true for many pens on the market. Each Beboe pen is metered with 120 hits, and as you draw on the pen, a light turns on; it starts blinking once you’ve consumed a full dose, which is five milligrams.

And for a relatively new imbiber, this can make all the difference between feeling pleasantly buzzed and feeling completely out of control (hide your chocolate pudding packs, people).

Does the experience of partaking in a little pot need to be this fancy? Well, no. But for the curious set looking for something that’s the opposite of intimidating, as well as super discreet and aesthetically pleasing, the $60 price point is square in the range of what you’d pay for similar products.

The difference is, those don’t make you feel like you’re Alice in Wonderland—well, not straight out the gate, at least. Beboe products are available for purchase in California only, at select retailers. Find out more here.