Talking to Anjelica Huston, you have to wonder if she’s playing you. Is she as interesting and unfiltered and real as she seems? Or is she putting it on? She’s an accomplished actress after all. An Oscar winner with a long, glorious resume to her name. And her savvy pre-dates even her work as an actress and director—hailing from Hollywood royalty as she does.

So, is she for real? I choose to believe she is. Partially because everyone else I know who has ever met her concurs. And partially because my conversation with her was the only bright spot in a shitty, shitty week of being reminded that our country does not seem to care all that much about the lives of women.

Anjelica Huston cares, though. And she knows what micro-aggressions—the kind that so many of us experience at work, at home, and in between, constantly—feel like. The types of micro-aggressions that feel infinitely amplified against the backdrop of Supreme Court confirmation hearings that seem intent on sidestepping and dismissing the very believable experiences of women altogether.

Explaining how she found her way into the experience of her most recent character, Trouble’s Maggie, a bone fide angry woman feuding with her brother (played by Bill Pullman) over family land, she talks about how she’s had difficulties with her own brothers—as well as difficulties with a neighbor—and fused the two experiences together to start to inhabit Maggie.

“Men can’t help but to poke at us. They’re like matadors and we get to be the bull.”

She says, “One of the things that my brother used to do to me when we were growing up is look at me as though I were a moron. It was a very subtle thing. It didn’t have to do with nakedly criticizing me like Mr Trump criticizes Dr. Blasey Ford. No, he just kind of insinuated that my brain was lightweight.”

It brings my own swirling anger a bit closer to the surface, thinking about the smug men who have spoken to me in this way. But Huston has a greater point to make about the state of things today. “It’s incredibly depressing what’s going on lately in the treatment of women,” she says.

“Woman have been struggling to maintain their lives in a world where men and male anger have taken over. And I think we woman are equally furious, it’s just that we’re [a] not allowed to show our fury; that’s unladylike, it’s unpleasant, it’s not sexually attractive to have a woman screaming at you—do you know what I mean? I think men’s reaction to women’s anger is…I think they get sort of terrified, but they can’t help but to poke at us. They’re like matadors and we get to be the bull.”

“[Witches are] so great to play because they’re just furious—and everything dreadful happens to them.”

She could rant about this for hours, but I’m curious about how she cultivates the confidence to speak openly and make herself vulnerable in this way. It feels rare for a celebrity of her stature, especially. It comes back to her family, she tells me. “I had very outspoken parents. Sometimes I get in trouble for it; I say too much of what I feel. But I think it’s important to say what you feel and to air your grievances because otherwise they do build up badly, like Maggie in this film.

“She kind of gloats on her grievances, and [when you do that] it starts to eat you alive. So I think we all have to go out there and share our commonalities with each other and to see if there’s something we can do about the stuff we don’t like.”

Because as much as she’s depressed and vocal about the state of things, she has a curious, fantastical, cautionary idea of what happens when your anger consumes you. She urges me to think about the connection between her character Maggie, “a crazy bitch” who is “behaving at her worst throughout the movie” and some of the most iconic roles she has played over the years: a trio of witches we meme to pieces during the month of October.

“Witches are women who have subsumed their anger, right? They are in such pain and fury. Everything about them hurts and every time they look in the mirror they hate what they see. They’re so great to play because they’re just furious—and everything dreadful happens to them.” I hadn’t pieced the mythology of witches together with angry women in that way, but the connection seems to work.

Especially when you think about how accusations of witchcraft have historically targeted women, based on some idea that the extremes of good an evil tend to reside in women. The Malleus Maleficarum, a famed treatise on witchcraft published in 1486, makes exactly this case. It roots the evil of women in their lust—and their ability to inspire lust in men. It suggests that women are more prone to vanity, to lying, and to treachery.

“Who wouldn’t be angry—just thinking about all the women who were burned or drowned, only to clear their names based on the fact that…they died.”

But historical indignation aside, Huston knows witches. After all, she’s played some of the most iconic ones in film history. From the inimitable Grand High Witch in Nicolas Roeg’s telling of Roald Dahl’s The Witchesto the Supreme Leader in Michael Jackson’s 17-minute short, EO, to the culture-defining Morticia Addams in The Addams Family,her look—arched brows, pale skin, and a sharply center-parted mane of dark hair—has become something of a standard bearer for witches of modern-day pop culture.

Considering the sheer volume of Halloween gifs inspired by her characters (and fixated on her face), I have a fantasy that she’s a real life super-fan of the holiday. Dressing up with Heidi Klum-level enthusiasm in over-the-top reimagining of the Grand High Witch, I envision Huston painting the town red in character every Halloween. She doesn’t. Halloween parties “spook [her] a bit” and it’s likely been 15 years since she last attended one.

Sensing my disappointment, she offers an explanation: “I think, maybe, it’s because I’ve worn the costumes in movies, and I don’t know, I don’t want to go back into costume.” Fair enough. But her affection for those witches is strong. She can’t choose a favorite; after all “they were such iconic witches, each so different in her way—and just incredibly fun to play.” 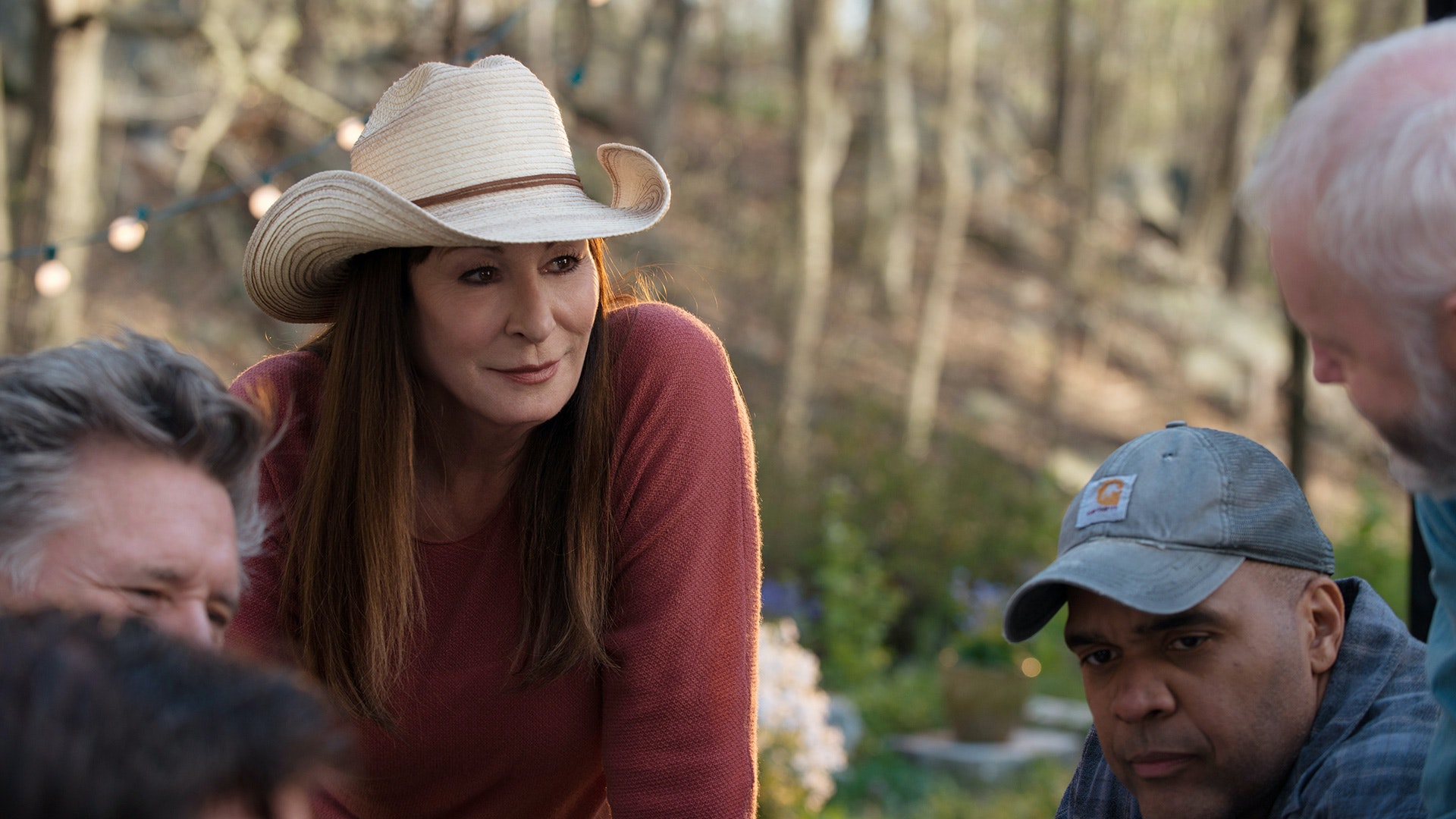 And for Huston, who has built a reputation playing witches and evil stepmothers and angry, intimidating women of all stripes, it’s not the wattage at which the character emanates venom that makes them interesting. For her, it always comes down to the writing.

And after working with Trouble’s Pulitzer-winning writer/director, Theresa Rebeck on Smash, she knew she could count on a beautifully written role—and a collaborative one—this go-round. “Theresa Rebeck wrote me a great part. And the great thing about her is that she’s such as receptive person and my favorite kind of writer because in an ongoing series, I could go to her and say, ‘Theresa, I want a boyfriend’ or ‘Theresa, I want to get my money.’ And she’d say, “Okay, great, yeah, we’ll do that.” And she’d write it into the part, and there would be something incredibly creative and exciting about that because one was actually able to alter the trajectory of the character on set. Fantastic.”

She’s the first to acknowledge that this type of collaboration is rare in Hollywood. “Most times you go on set, you say, ‘Oh, can we change this?’ And you see the pained expression on everyone’s face because you want to make it an ‘and’ instead of an ‘it’ or something. Everyone gets very worried when you have an idea, unless you’re with somebody tremendously, energetically reactive like Theresa. She grabbed the bull by the horns.”

Which brings us full circle to the matadors provoking the wrath of women, goading their anger with insinuations that their ideas aren’t worth hearing.

“When I have fury in my heart or excess energy, it’s nice to be able dig a big hole, a sizable hole, and put something positive in there.”

It doesn’t feel like a coincidence that this rare experience of true creative collaboration happens between two women who are exceptional at what they do—confident, unyielding, and unthreatened. Asked separately, Huston describes her definition of success as some hybrid of “putting bread on the table” and “doing something to help the world.”

All of which jives perfectly with her final advice to all of the angry woman out there. “Dig holes and plant trees. It’s really, really effective. I’ve done it for years. And when I have fury in my heart or excess energy, it’s nice to be able dig a big hole, a sizable hole, and put something positive in there. Something that will grow big and green and strong and help our earth.”

Trouble,written and directed by Theresa Rebeck, opened Friday, October 5, and is in theaters now.